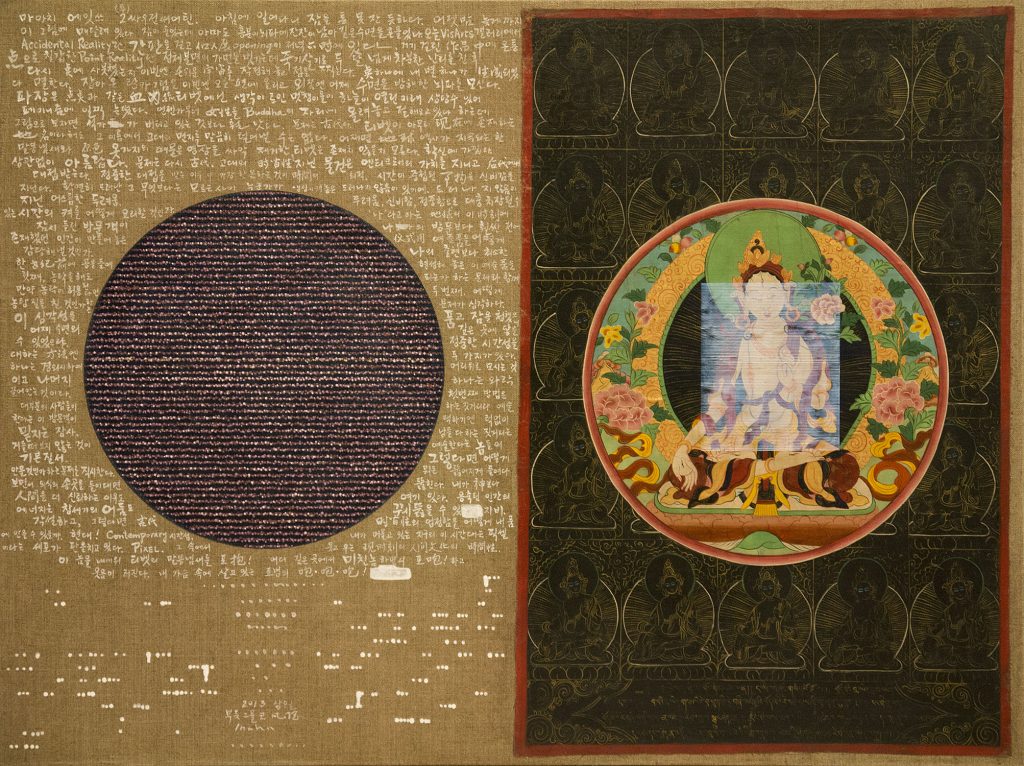 BG Muhn, professor of painting at Georgetown University in Washington D.C, is a
contemporary artist whose work also explores Buddhist philosophies. Highlighted in
this exhibition are four pieces that illustrate these ideas through innovative
transformations of the traditional Tibetan thangka paintings.

BG Muhn is a visual artist and a professor in the Department of Art and Art History
at Georgetown University. He has achieved substantial and noteworthy professional
recognition through solo exhibitions in venues such as Stux Gallery in the Chelsea
district of New York City, Ilmin Museum of Art in Seoul and the American University
Museum in Washington, DC. Muhn has received several awards for his artistic
merits, including the Maryland State Arts Council’s Individual Artist Award and Best
in Show at the Bethesda Painting Awards competition. His artwork has been
collected in museums and galleries that include the National Museum of Modern Art
and Seoul Museum of Art in South Korea. He also has received acclaim in reviews
and interviews with The New York Times, Art in America and CNN.
In addition to actively showing his artworks, Muhn has taken a strong interest in
and studied the relatively unknown field of North Korean art. He made numerous
research trips to Pyongyang, North Korea over the last six years and visited art
museums such as the Choson National Art Museum and creative institutions
including Mansudae Art Studio to conduct interviews of artists, art historians and
museum staff. He has delivered lectures on North Korean art at academic venues
and cultural centers including Georgetown, Johns Hopkins, Columbia and Harvard
universities, and the Water Mill Center for Robert Wilson in Long Island, the Korea
Society in New York and the Wilson Center in Washington, DC. His research on
North Korean art culminated in a book, Pyongyang Art: The Enigmatic World of
Chosonhwa, which was published in Korean by Seoul Selection in the spring of 2018.
The English version of the publication will be available in the summer of 2019.
Muhn has curated two major North Korean art exhibitions, one at the American
University Museum in Washington DC in 2016 and the other most recently at the
Gwangju Biennale in 2018. North Korean Art: Paradoxical Realism was published in
English in conjunction with the Gwangju Biennale.

Dr. Kurt F. Leidecker, a former professor of Asian Studies at Mary Washington College
and a preeminent collector, chose Mary Washington as the home for his extensive
study collection of 235 Buddhist or Hindu devotional images, statues, paintings, and
carvings that were originally displayed in temples, shrines, and homes in South, East,
and South-East Asia. With approximately sixteen objects, this exhibition samples
statues and paintings of Buddhas and deities mostly produced in Tibet, India, and
Thailand. The highlight of this exhibition is the bronze Buddha statue, which was given
to Leidecker in 1957, when he was teaching at the Mahachulalongkornrajavidyalaya
University in Thailand. At the time, Leidecker was president of the Washington Friends
of Buddhism Society.

Posted in Past Events.